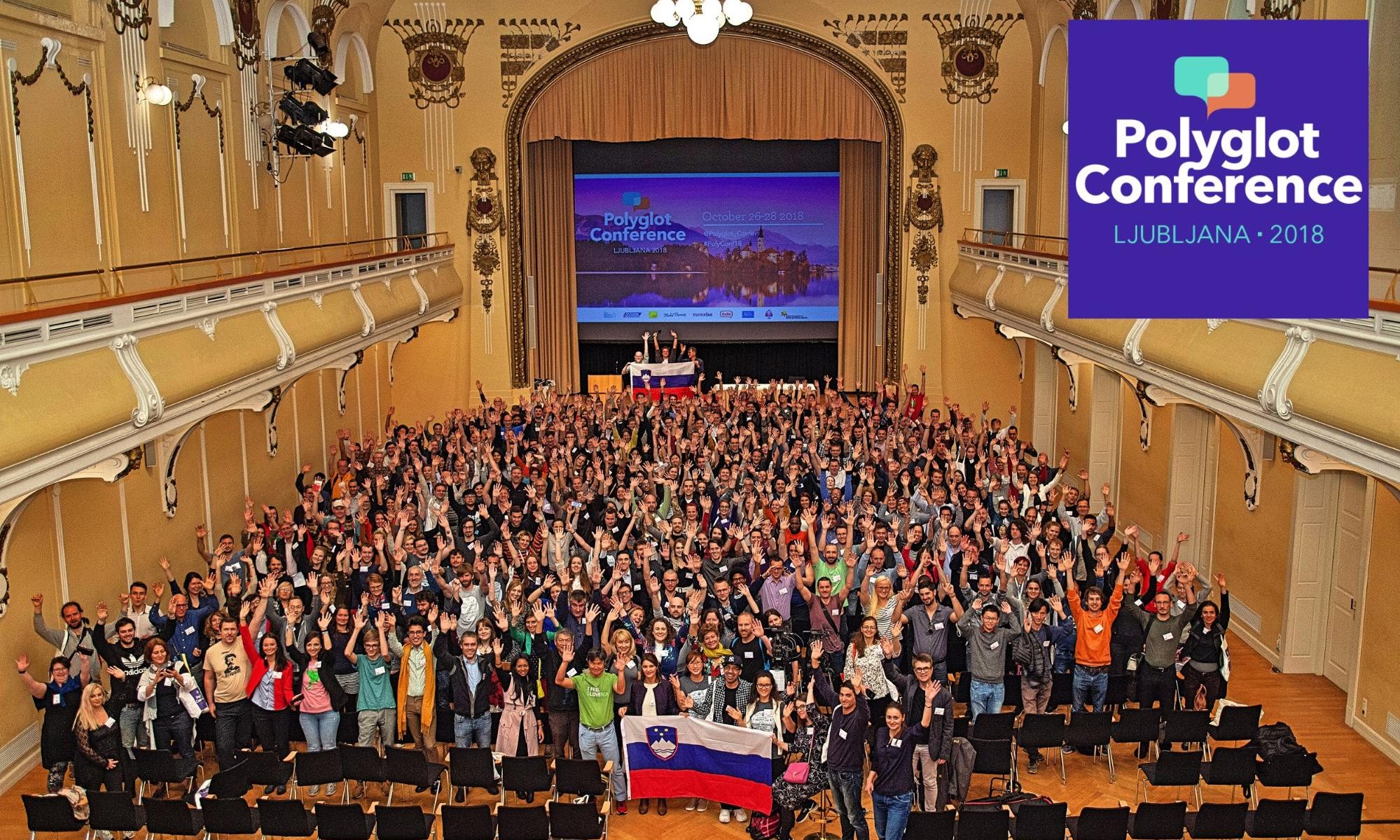 In 2018 my life was a crazy whirlwind of business trips, non-stop events and travel. My travels took me all around the world, but when I saw that Polyglot Conference was going to be held in Ljubljana I just knew I had to go.

It was easier said than done, because the conference was help in the same time period as our annual trip to Asia centered around Music China show in Shanghai, but I made it somehow work with all the flights and tickets. In the end I arrived home directly from China at midnight and had to get up super early the next morning to make it to the conference in time. Jet lag was in my favour, because it was daytime in China, so I was not too dead, but I knew that later on in the day I will start getting sleepy, so I brewed myself some strong green tea and took it with me in my favourite Totoro tea mug.

When I entered the conference I was a bit disoriented at first – I’ve never been to an event like this, so I didn’t know what to do or what to expect. I found a badge, wrote my name and stuck the flags of the languages that I knew, placing them at different levels. I just guessed my levels, since I never attended any proficiency tests except for English IELTS when I was like 17 years old.

Memrise is my favorite SRS program and they were very active at the conference, by organizing a pub quiz night, as well as giving away a lot of merch, such as these cute stickers. I am still in love with my Memrise T-shrit 🙂 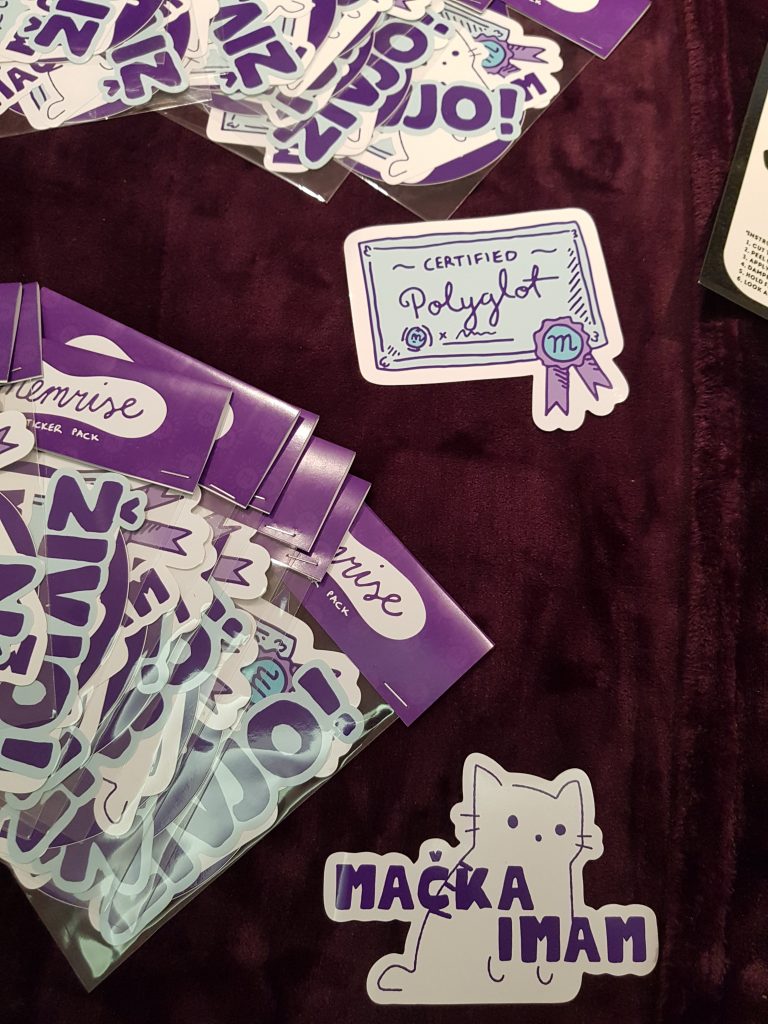 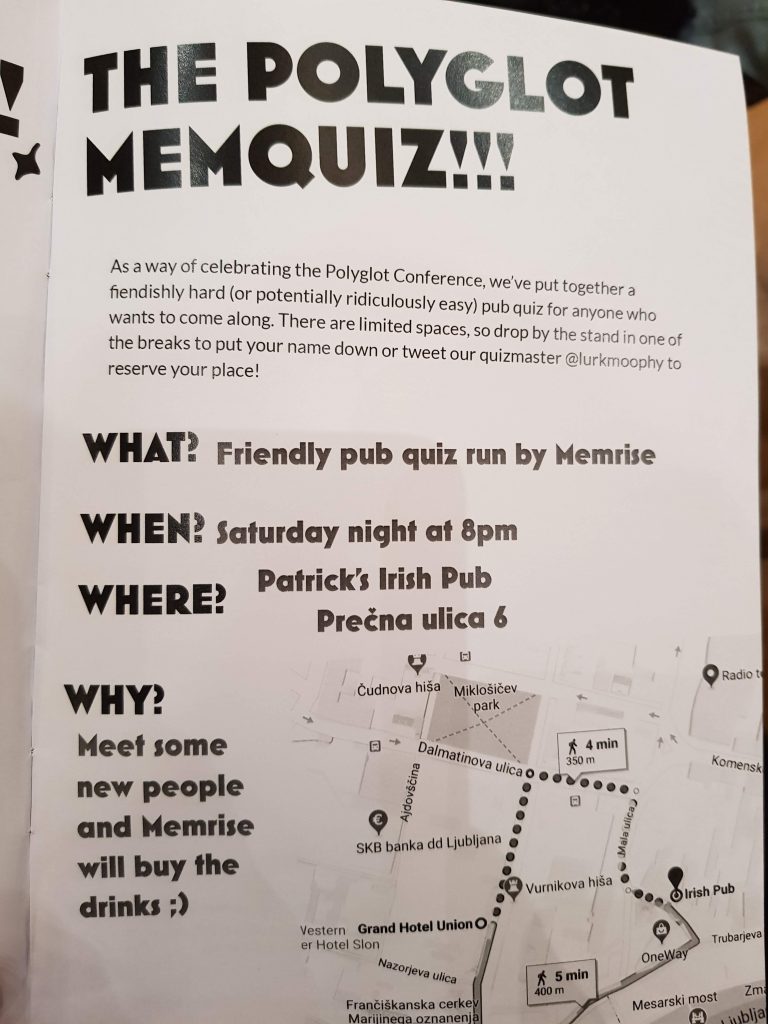 Being at the conference was super exciting. All the presentations were super interesting, motivating and I feel that I learnt a lot. I was also lucky to be only one of the locals, one of the few people who actually spoke Slovene, because the rest of the attendees all came from abroad. And this was also one of the reasons why I enjoyed the presentations on local languages so much. One of them was about Furlan language, spoken in area around Udine, Italy. It is the area of Italy closest to Slovenia and I’ve been there a few times, so I was naturally curious to learn that Furlan language is very different from Italian and to learn some basics. 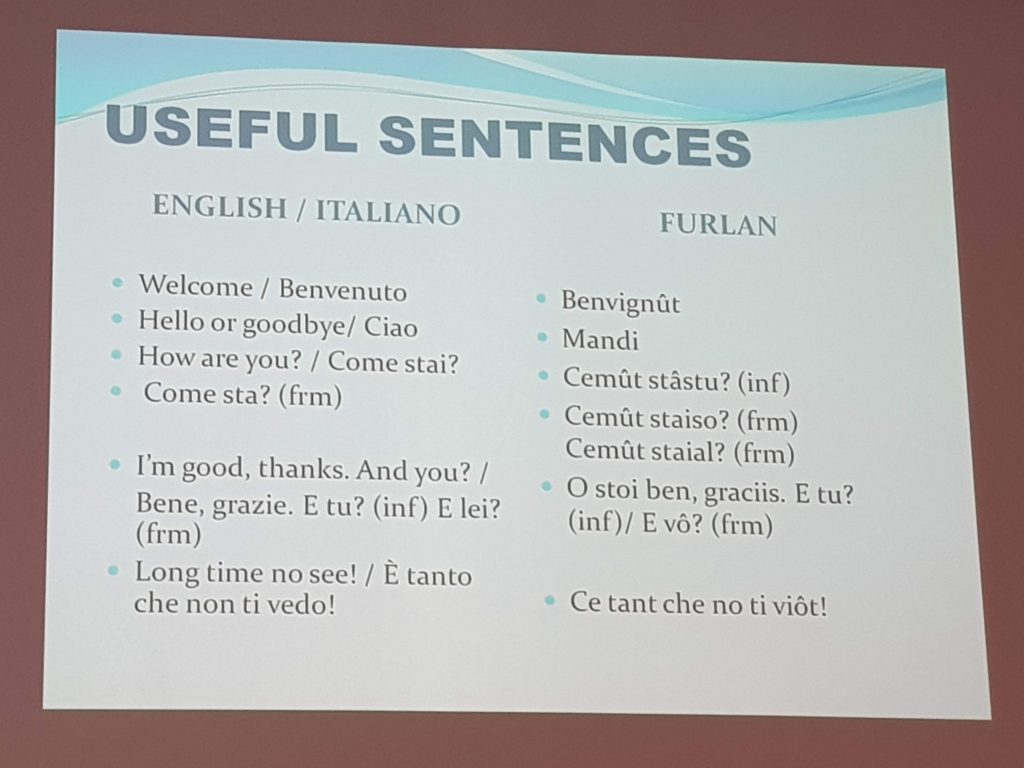 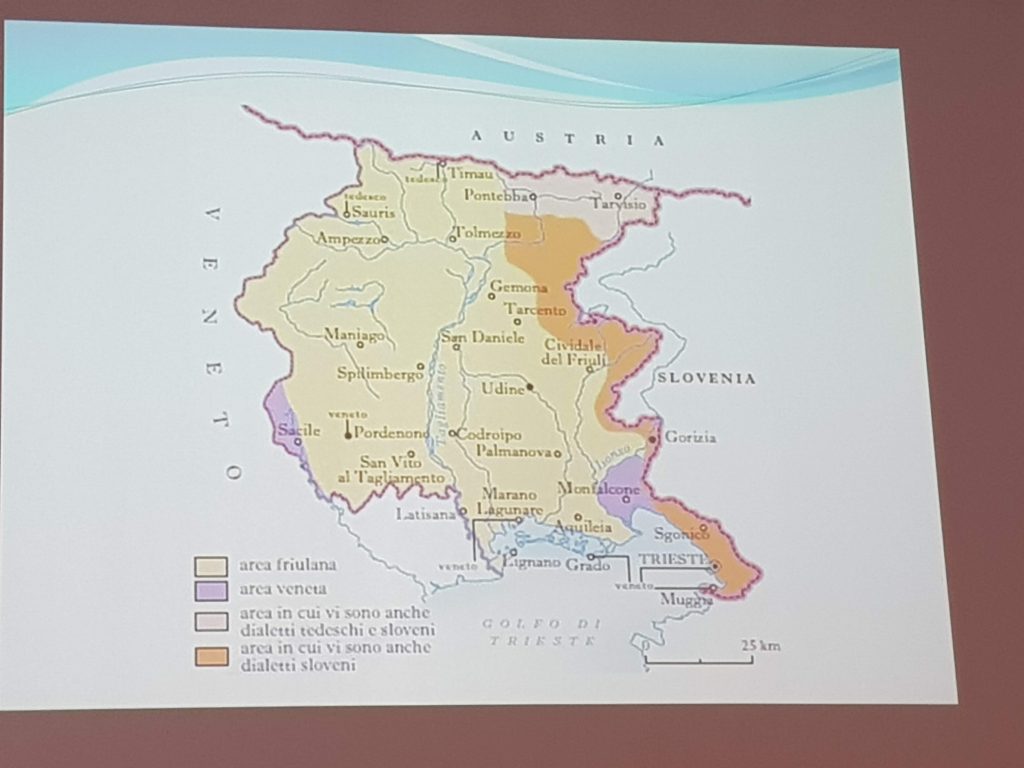 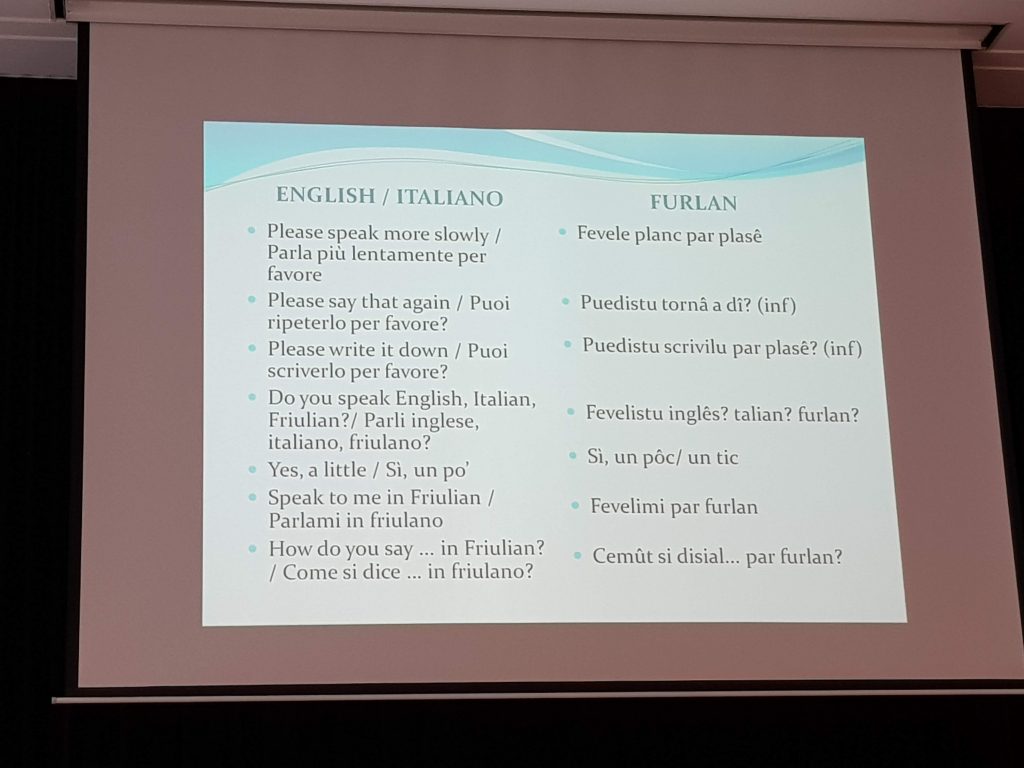 There was also a concept of promoting the language via music and supporting local bands and artists, as a way of getting young people to feel proud of their roots and interested in speaking their language, even if it’s a minority language. I also learned that there is an annual festival in Udine in support of minority languages called Sunseurope. I think it’s a great initiative and I would love to attend it in the future. I don’t know why I’m so interested in minority languages, it is just very curious for me that there are so many small languages around the world that few people know about. For example, in France there is a language called Occitano. When I first read about it, I thought “wow, wouldn’t it be so cool to learn a language like that to impress people by saying “I speak Occitano”. Seems like I’m not alone in this/ 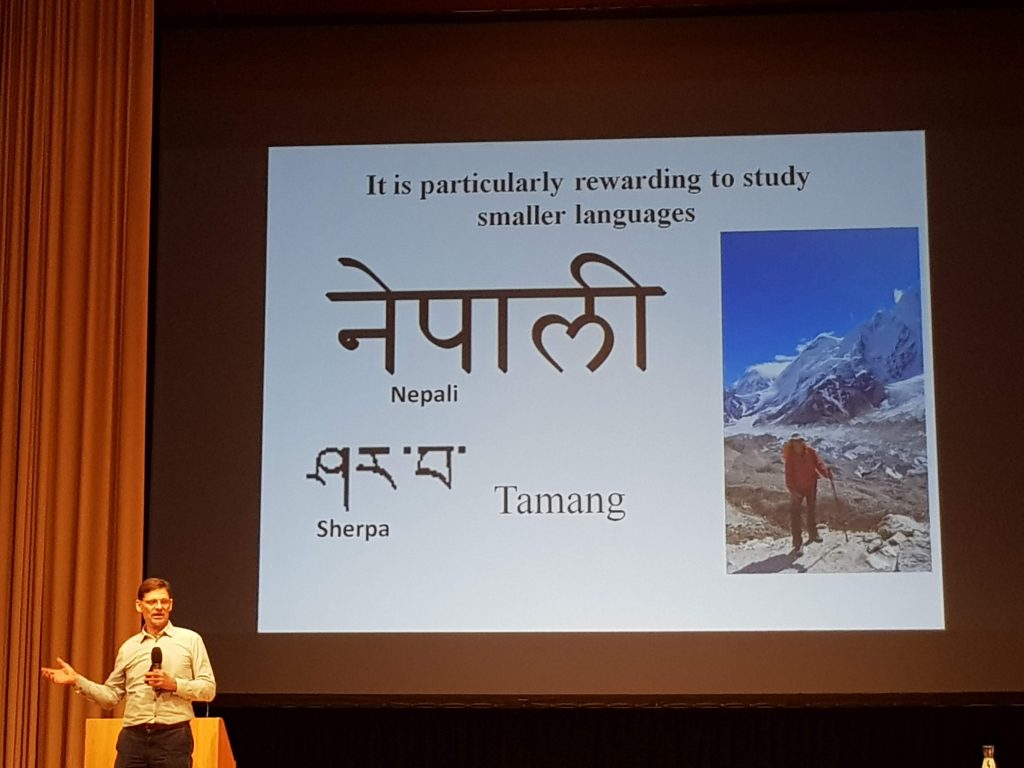 Anyways, back to the conference. The second language workshop that I attended was for Romani language. I had no idea about its Indian roots, so it was very interesting to learn about the history and background of Romes living in Slovenia. I feel like I actually learned something, because even after living in Slovenia for 8 years I knew very little of the Rome population here. Now I know much more. 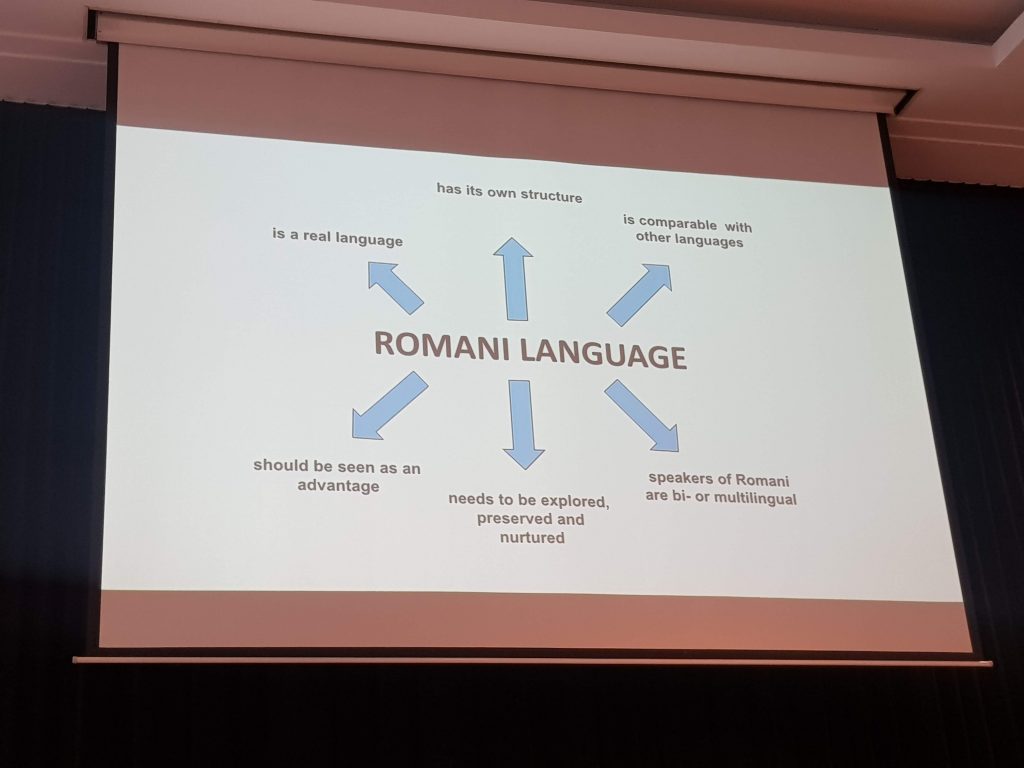 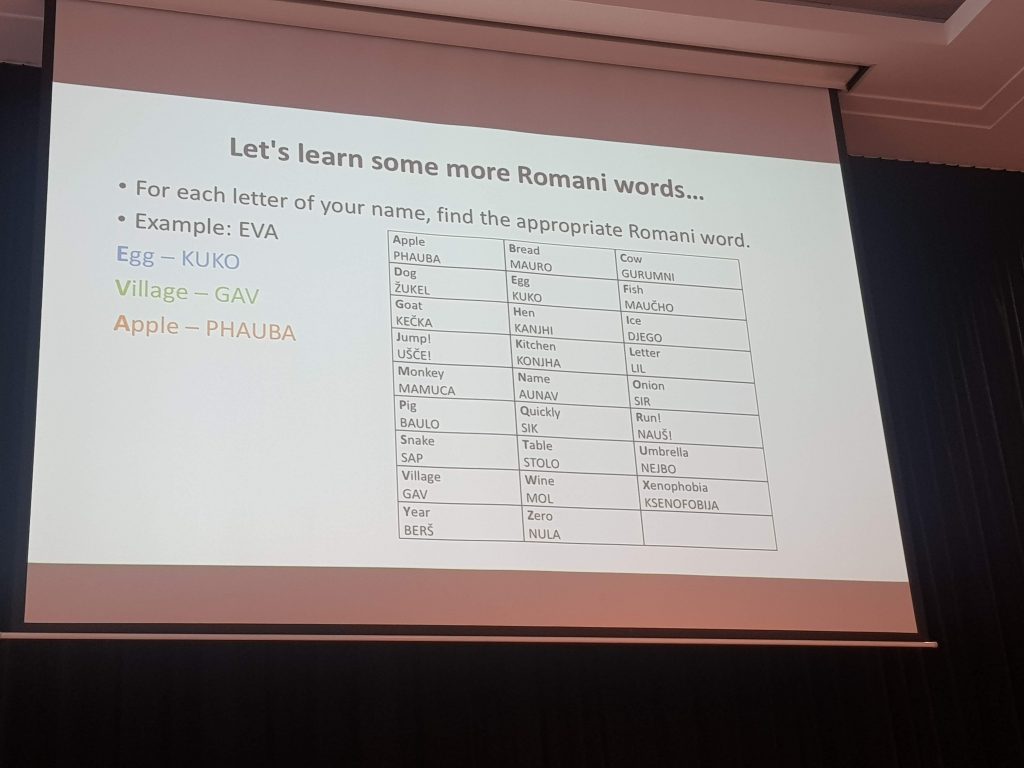 There were also workshops on how to organize language learning, on motivation and how language learning can change your life. I felt I could connect with each of the speakers and I got really inspired by them. 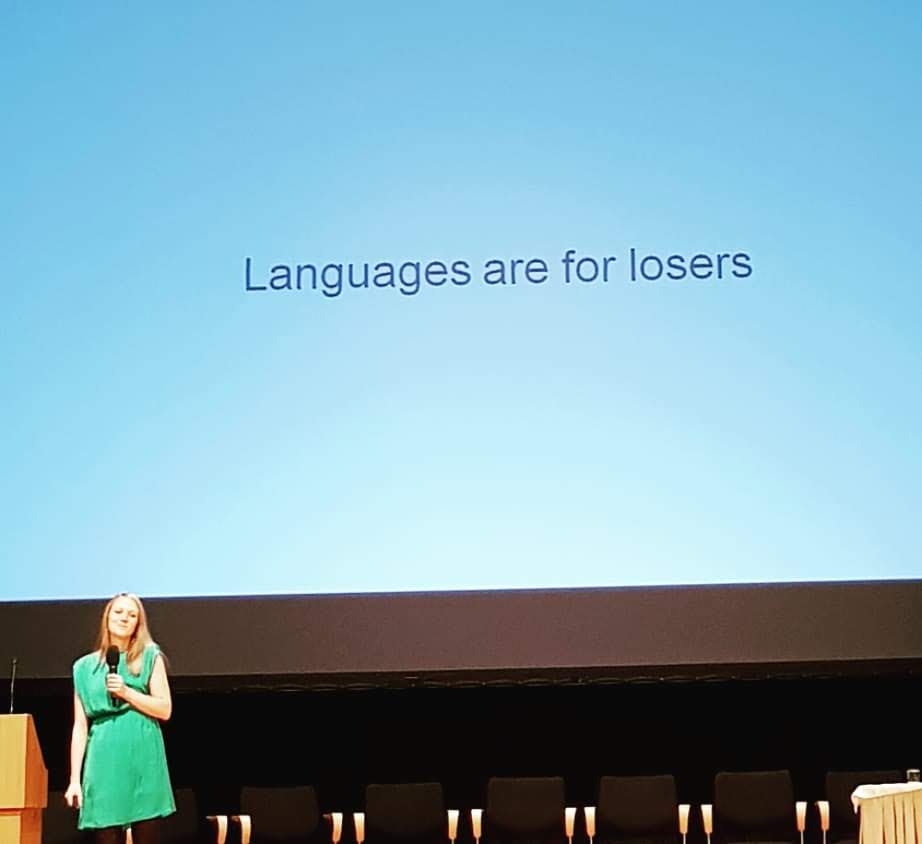 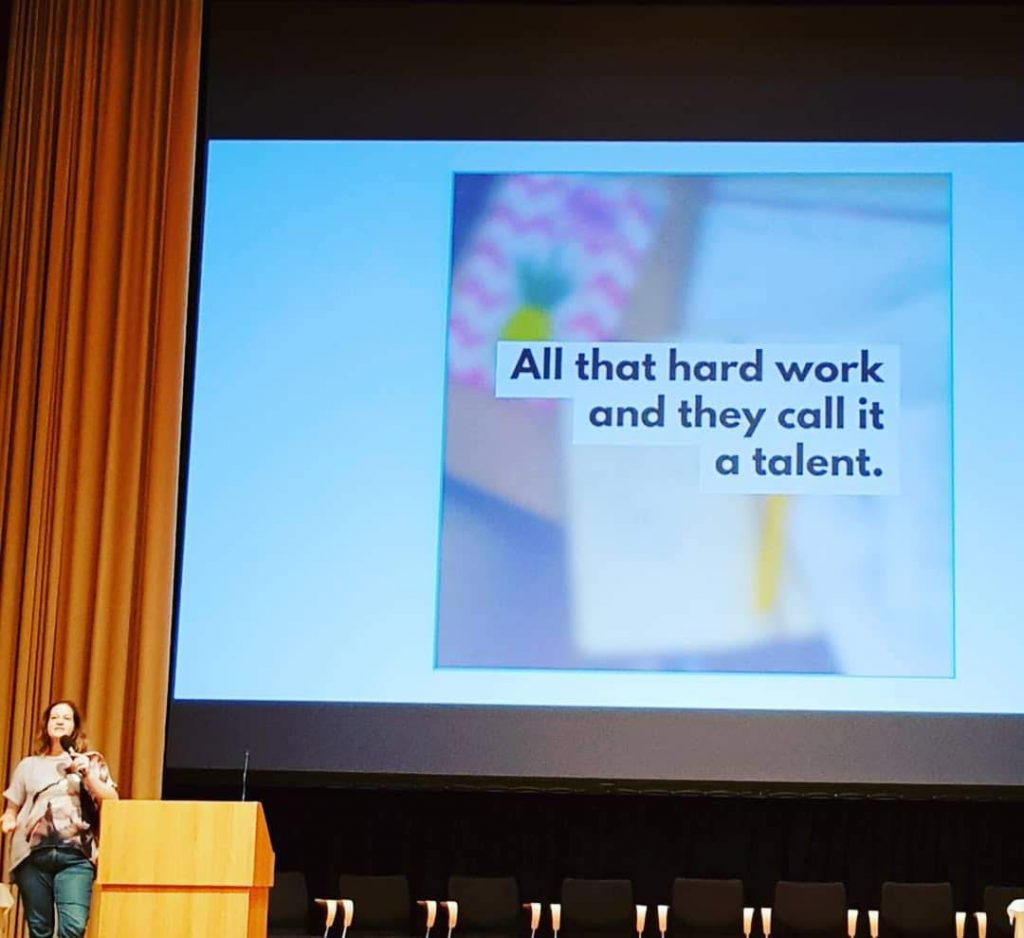 It was at that conference that I decided to start learning Mandarin Chinese. In breaks between workshops and presentations everyone was hanging out in the hall, talking to each other in any language other than English (because English is boring for polyglots, everyone can speak it, so it’s nothing special). Soon I realized that there were some recurring languages popping up in most conversations: Spanish, Russian, Japanese, Chinese and French, sometimes Korean. A lot of polyglots can speak German too but I didn’t hear it spoken much. I felt that if I manage to add Chinese and French to my languages, I would be able to participate in much more conversations at the conference 😊 Also Chinese is a language I actually needed for my work, because we travel to China quite often, I was just always super intimidated by the tones and characters. But being in that environment triggered something in me and I made my mind up. 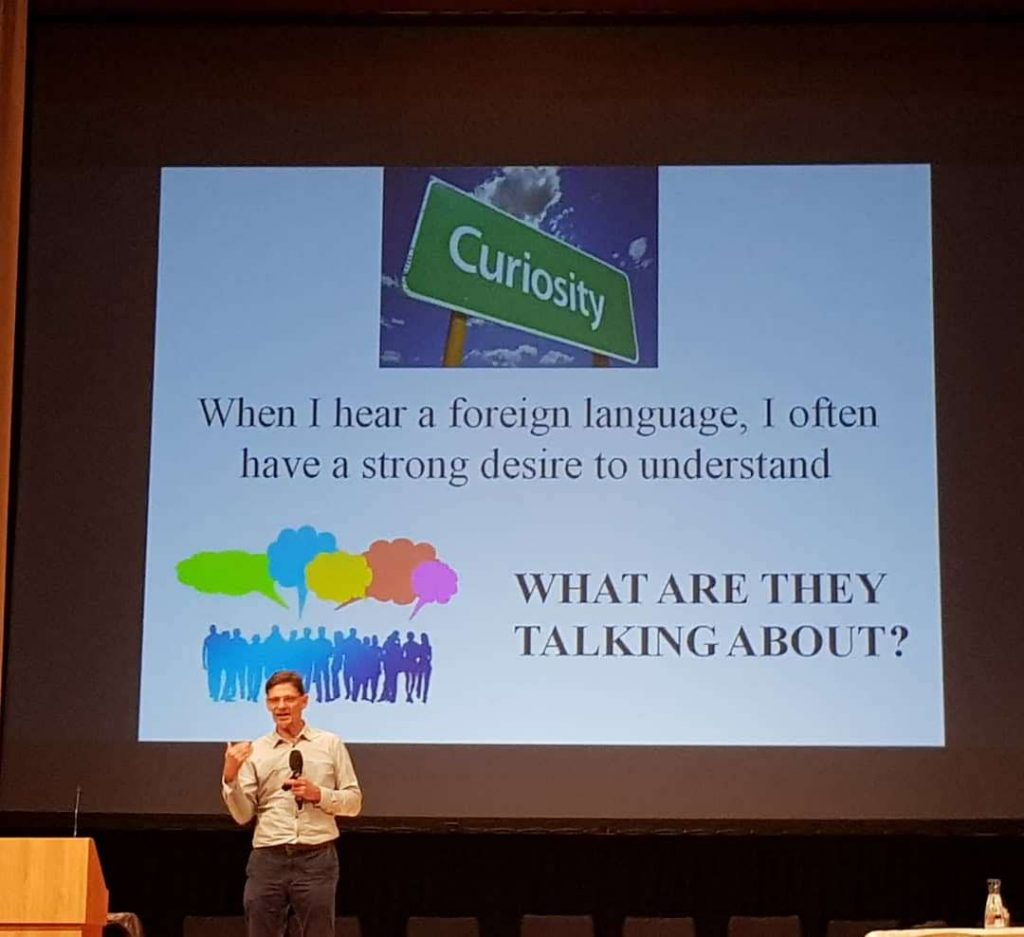 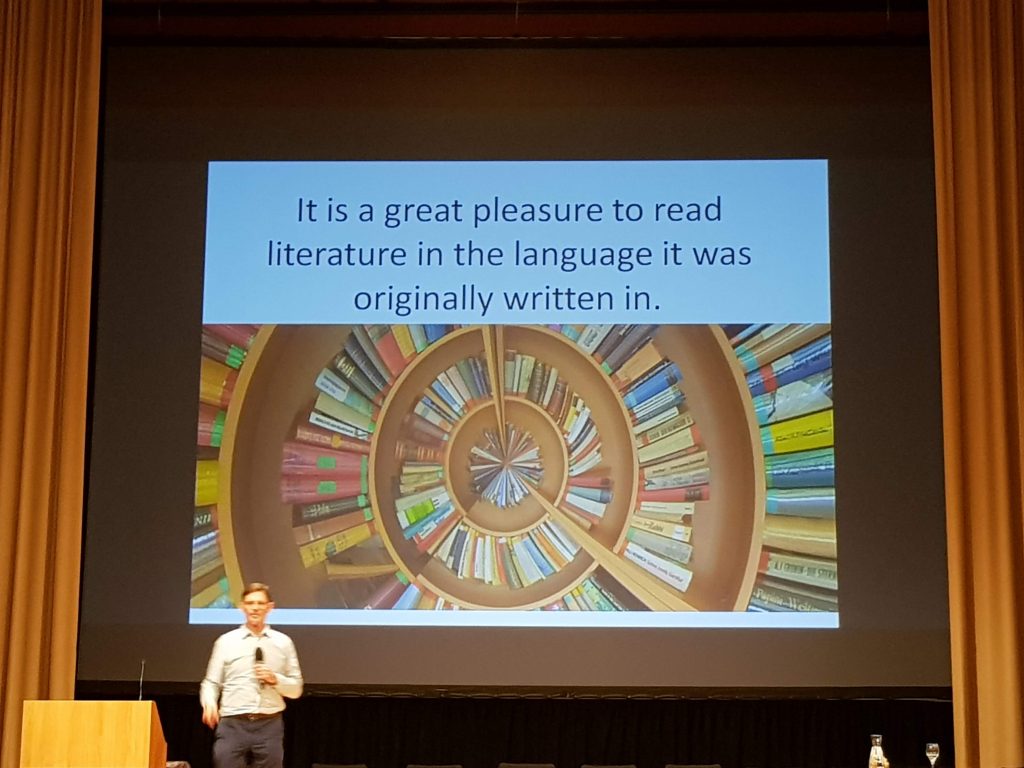 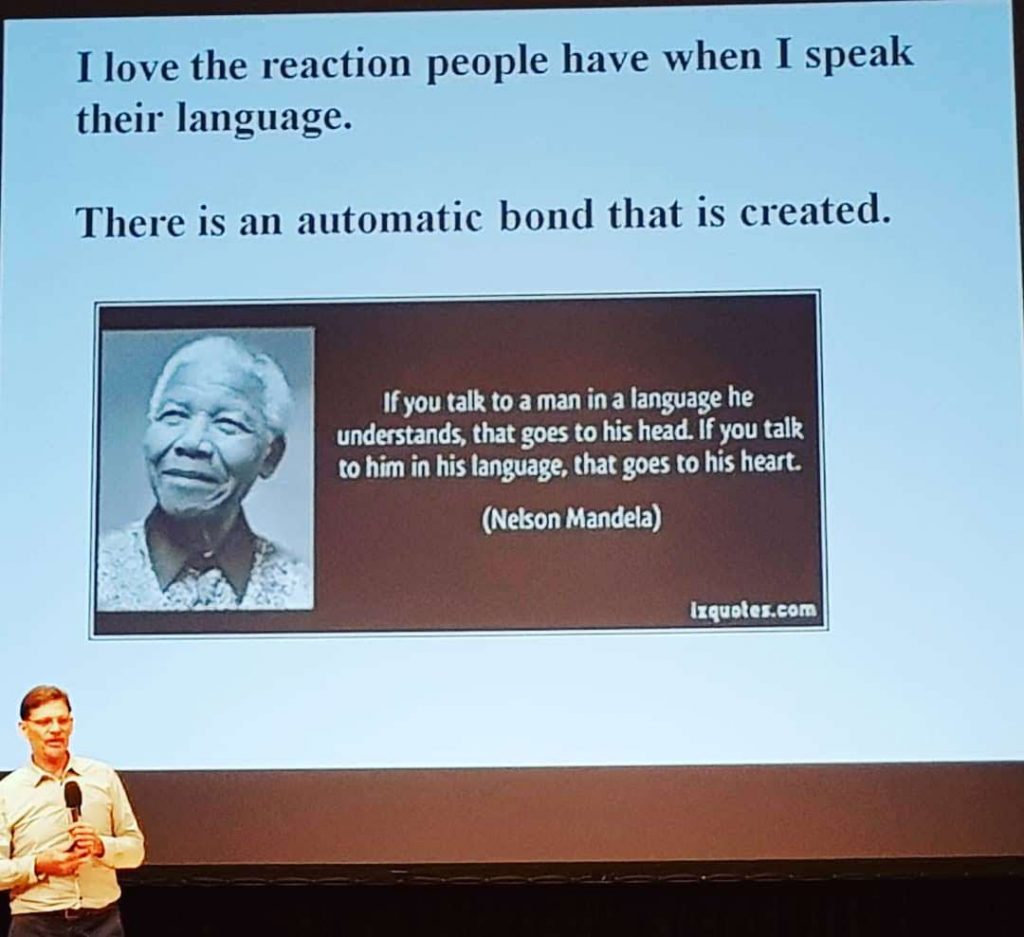 I also met new people, who are also interested in learning languages and got a chance to talk to and take pics with some of the speakers. Between “normal people” I am kind of a “black sheep” with a bizarre hobby, probably because most regular people associate language learning with boring classroom hours, painful homeworks and grammar drills, they don’t see how learning languages can be fun and fulfilling. But the people at the conference were the same as me, curious and active, they were not shying away in the corners, they were jumping into conversations and obviously enjoying the buzzing atmosphere and the challenge.

I really enjoyed talking to strangers, constantly switching between different languages, it felt like I was finally in a group of like-minded people united by the same passion and interest. After the conference some of us went to Postojna Cave together, and funnily enough our common language was Spanish, so we were all speaking Spanish to each other – a Russian, a French, a Korean girl, and a Chinese-American. We still keep in touch via Facebook with Tiffany, the Korean girl, and who knows, we might even meet again in the future 😊 I would definitely attend another Polyglot conference in the future if the opportunity arises! In the meantime I would just have to satisfy myself with watching videos on their Youtube channel. 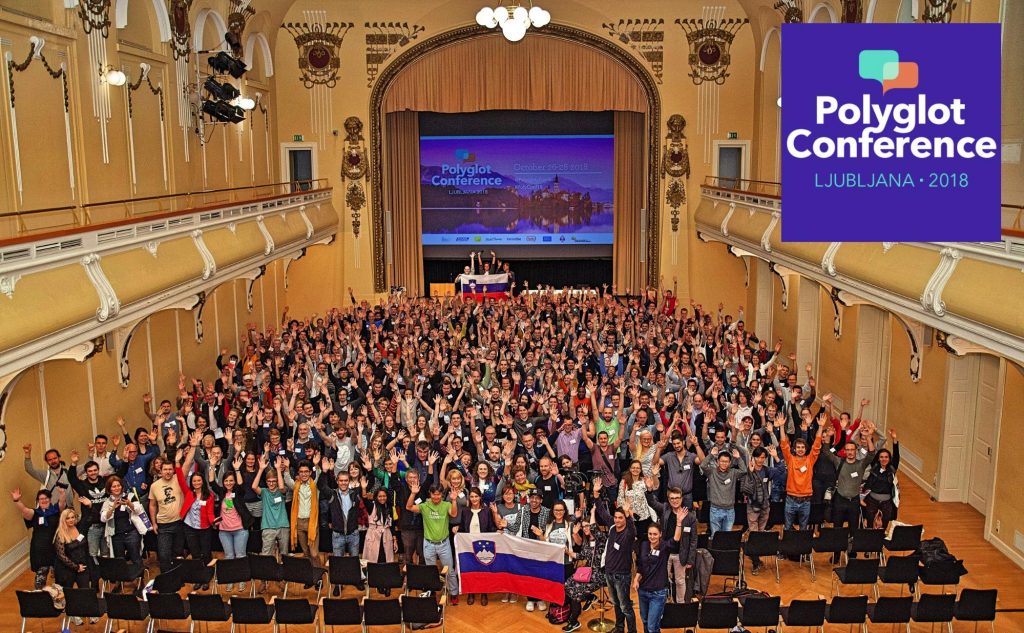 I am somewhere in this crowd! 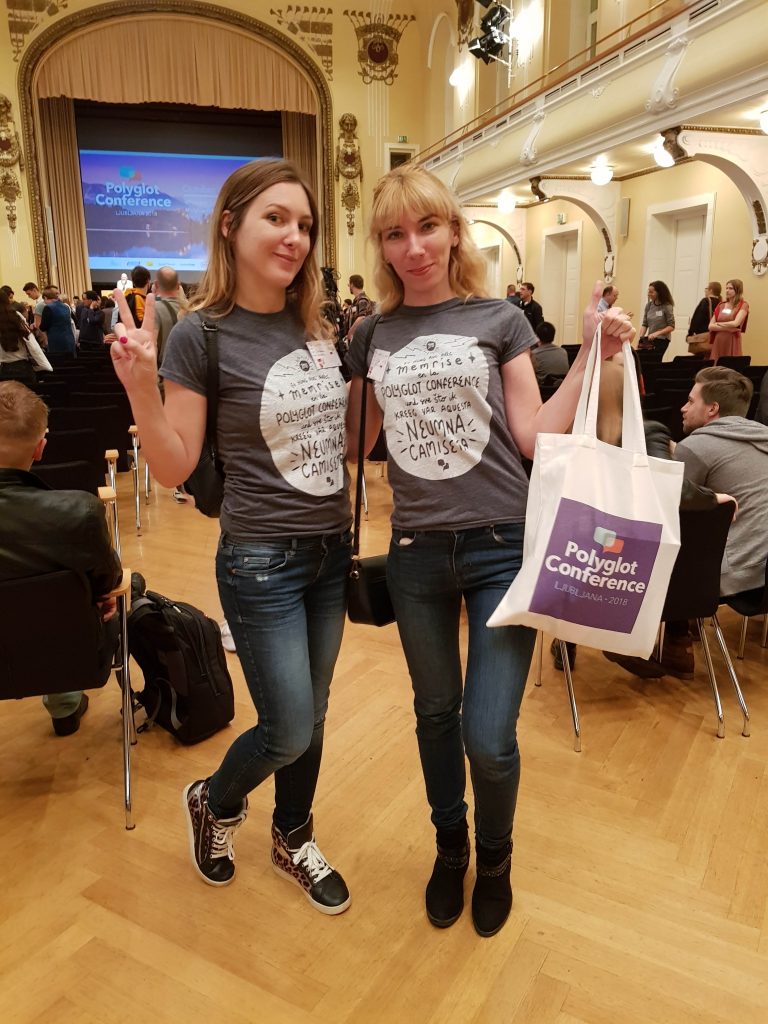 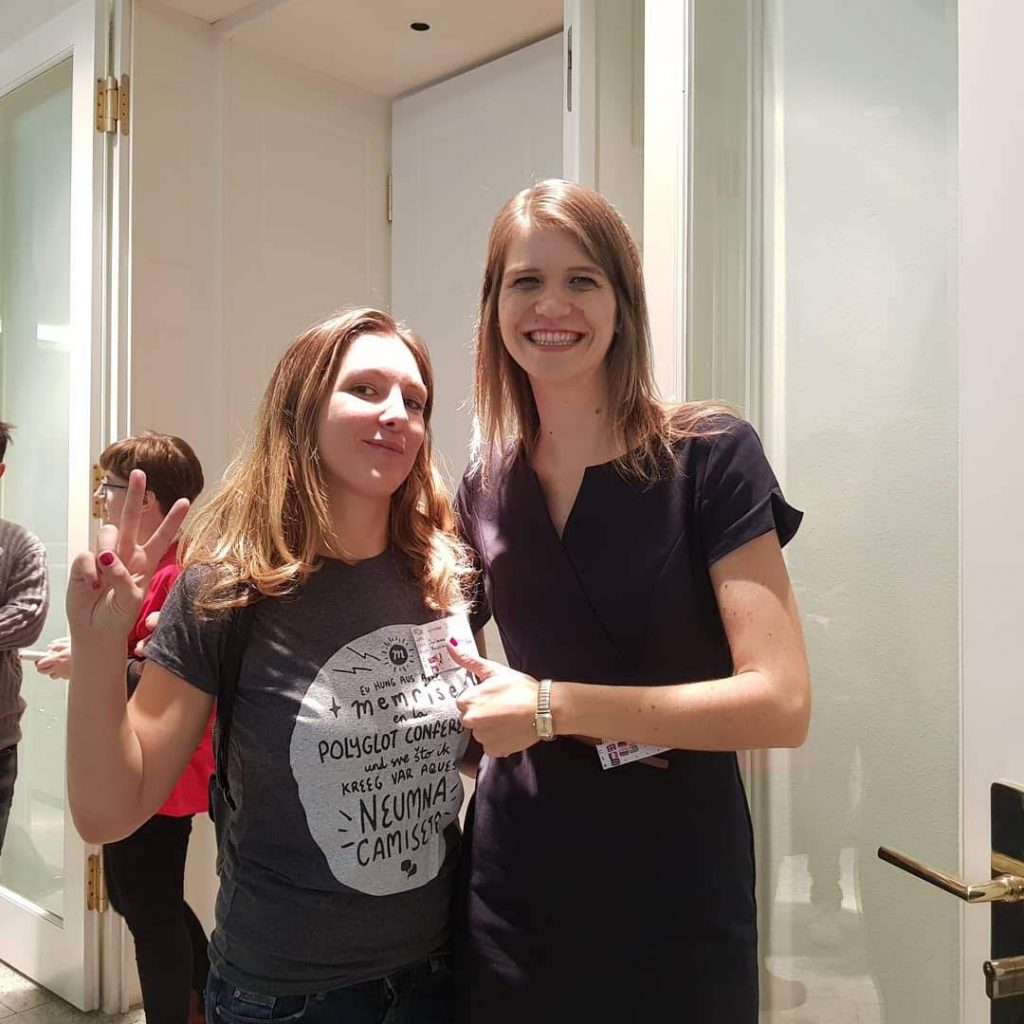 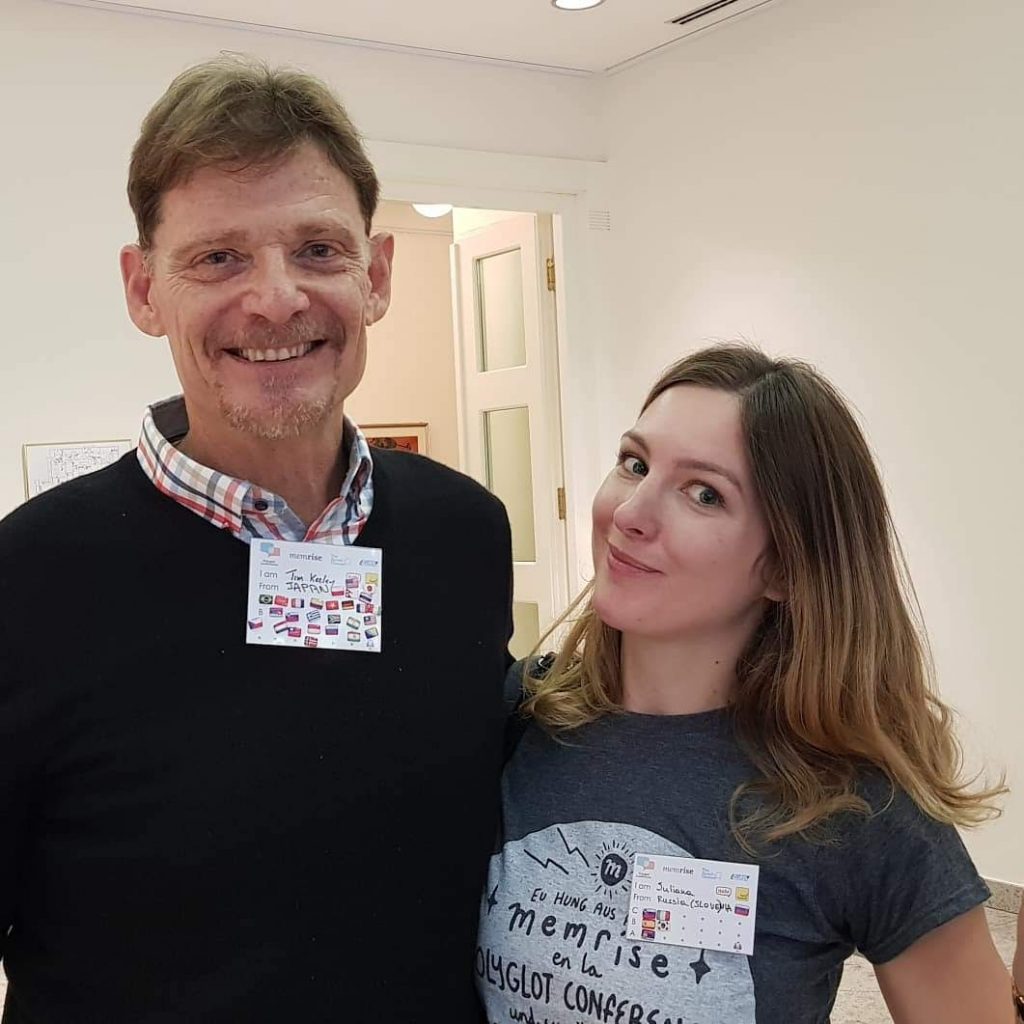 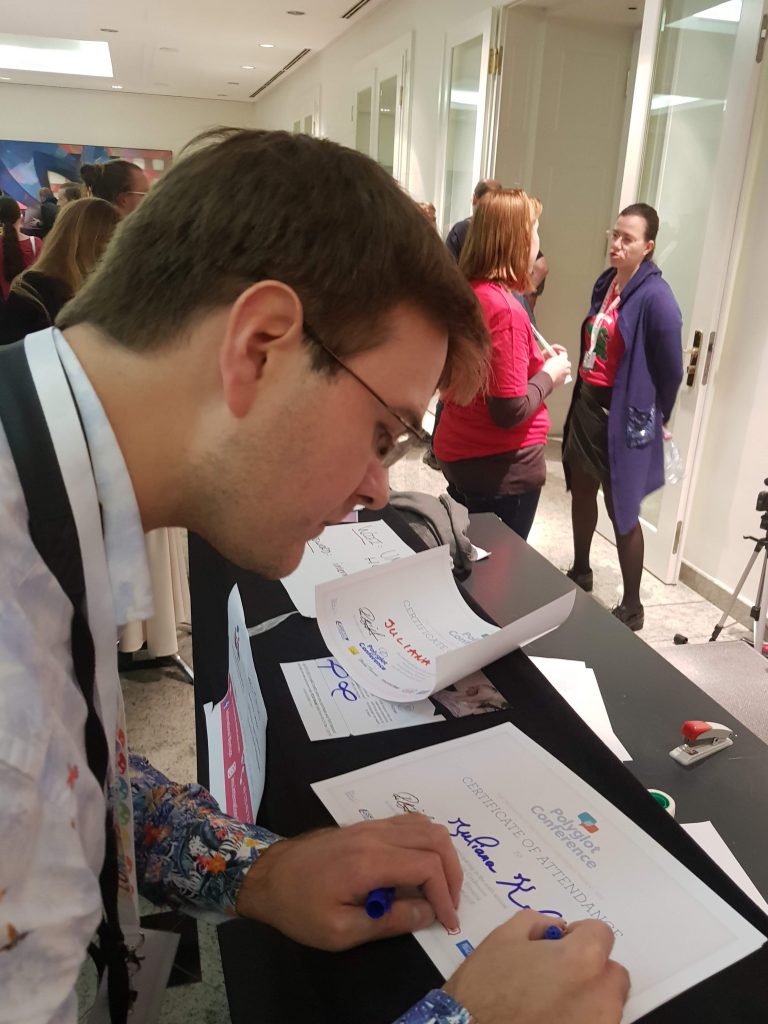 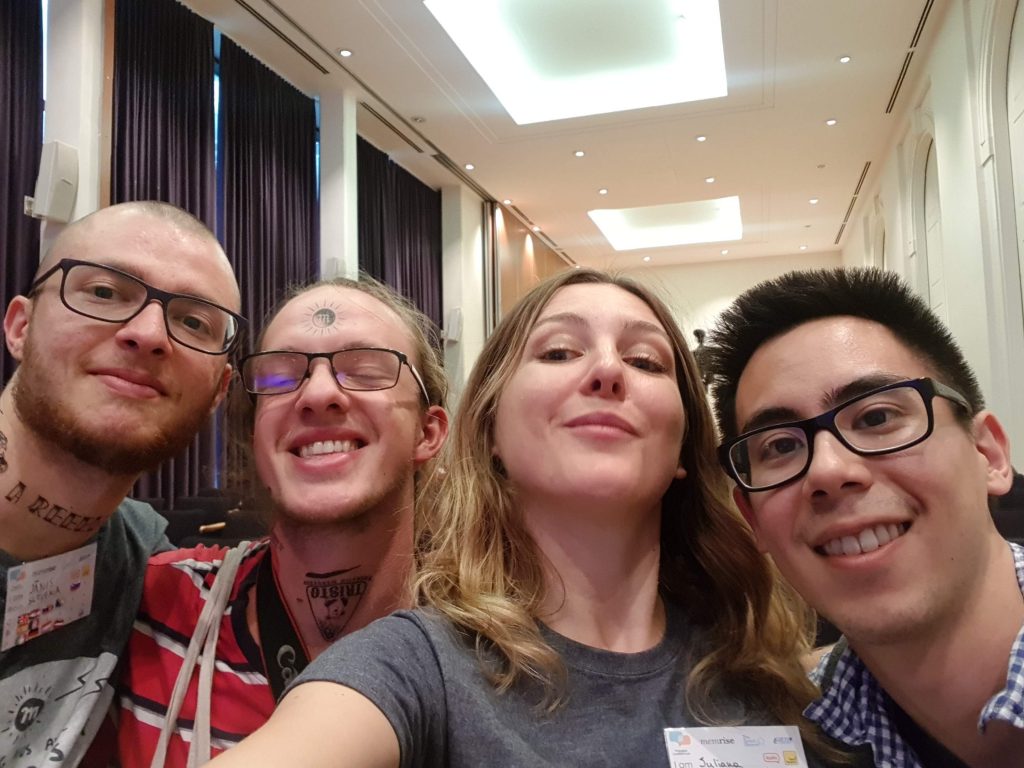 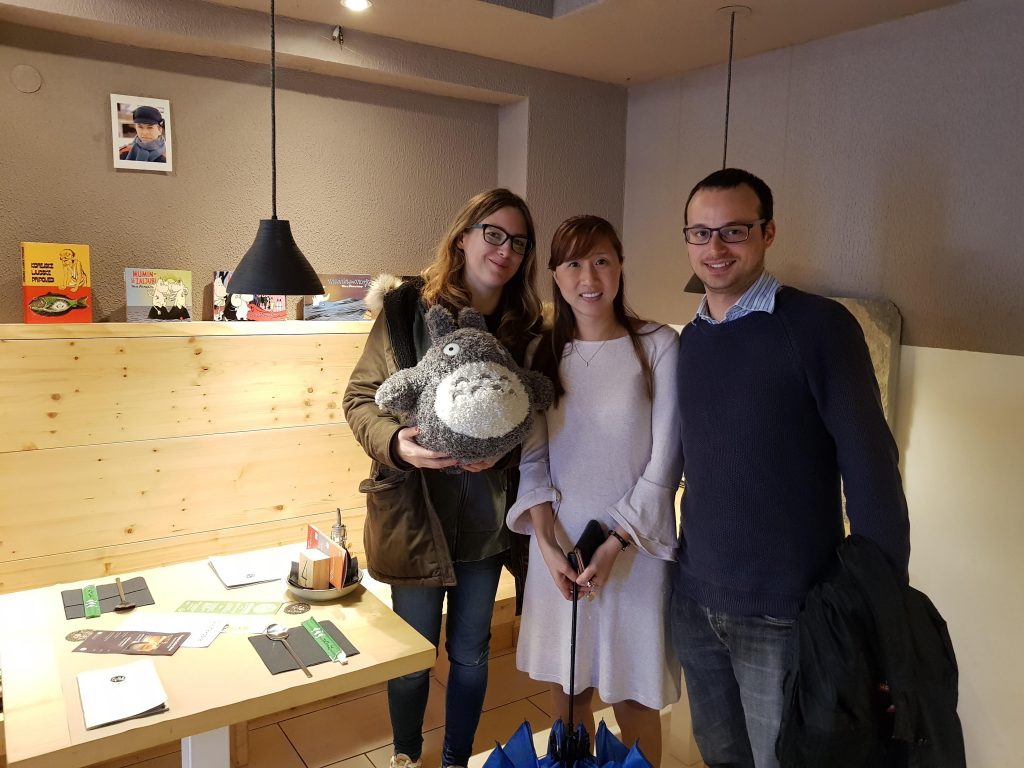 I created this website to share my language learning journey and tips that I discover along my way. I love learning languages and I think that anyone can do it. You don’t need to have a special talent, just use different system to what is usually taught in the classrooms,